It’s been a long long time since a grooming tool shocked me in a good way.  Honestly, it’s been a long long time since I was motivated enough by a review to purchase a new type of dog grooming tool.  I’m pretty traditional, sticking to my trusty greyhound comb, with occasional support from the slicker brush and ZoomGroom.  But a friend, who has australian shepherds, really recommended the Andis Deshedding Tool and I read a number of other reviews from people with a wide range of breed and coat type dogs that promised it only pulled out undercoat and didn’t cut the top coat as many deshedding tools do, so I spent the $20 and bought one, added it on to the dog food order for the month from Chewy.com. 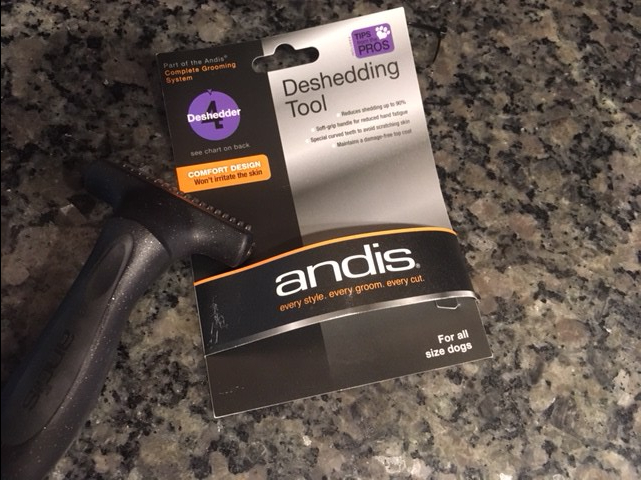 It arrived today.  I’m completely blown away.  I do not think I have EVER managed to get this much undercoat out of Tom with such ease in such a short amount of time.  And as promised, very very minimal top coat came out, 99+% of what I pulled out was fluffy soft undercoat.  Undercoat that is now in the trash and not all over my house.

Tried it on Zora too, again so much under coat, very very little top coat pulled out.  It was AWESOME!!

I was told the trick with it is to always use it following the grain of the coat, and to do it in as long strokes as possible.  Apparently if you use it against the grain, or in short choppy strokes, you can risk cutting and pulling out the top coat.  Not something I want to do.  Undercoat only is my goal.

I’m getting zero compensation from Andis or Chewy.com for this review.  I’m so impressed I feel compelled to tell others.  Seriously, I’m floored, which at this point in my dog life is pretty hard to do I’ll be honest.  Awesome tool and best $20 I’ve spent on the dogs in quite some time.

Or add www.maplewooddog.com to your favorite blog or RSS feed reader to stay updated on new posts.